We partner with some of the best gourmet local artisans to bring the best of local food and garden goods right to your doorstep.  Here is a little bit more information on our friends… 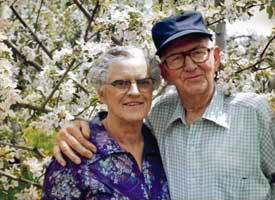 John Barden and Hazel Dean were married in 1930 and founded Barden Family Orchard in 1931. They planted some of the first apple trees along the eastern edge of the orchard. These trees are the oldest trees on the farm, and are evidence to John Barden’s keen interest in the science of apple growing. They were “grafted” many years ago, meaning that a new cutting was placed in the notch of a branch of an existing tree to produce an additional variety on that tree. These particular trees have a mixture of Cortland, Macintosh, and Macoun branches on them. John was excited to experiment with new apple varieties and enjoyed growing fruit into his early 80’s.

Like his grandfather, Gilbert also has a strong interest in horticulture, and loves to farm. Barden Family Orchard now grows many varieties of apples, pumpkins, winter squash, peaches, and sweet corn, and has added raspberries, tomatoes, summer squash, zucchini, cucumbers and eggplant.

In the 1980’s, he and his grandfather began to replant much of the orchard to both semi dwarf apple trees as well as peaches. He also began to plant pumpkins and winter squash for more diversity. This was an exciting change for the customers. Not only could they pick apples and peaches, but they could also pick a pumpkin for Halloween.

Formed in January of 2013, the RI Mushroom Co., LLC is a growing and dynamic company that cultivates and distributes exotic mushrooms to restaurants and specialty markets in Rhode Island and beyond.

Our farm is located in West Kingston, RI where our grow rooms create the ideal environment for mushroom propagation. We maintain a humidity level of over 95% and a constant, cool temperature that allow our crops to steadily grow into a commodity that is increasingly sought after by professional chef’s and home cooks alike. We currently offer several varieties including blue oyster, crimini, golden oyster, king oyster, maitake, portobella, and pioppino — each with its own texture and flavor profile.

Baffoni’s Poultry Farm was started in 1935. Today, four generations of the family work on their 80 acre farm in Johnston, where they raise approximately 25,000 chickens and 1,200 turkeys. They raise leghorn and R.I. Red hens for egg production, and broad breasted cornish broilers and fryers.

Deep in the unspoiled forests of New England, the Dukcevich family is hand-making some of the finest charcuterie in the world. More than three decades ago, the family brought their delicious salumi to America from Northern Italy. It all starts with the hogs, which are raised on American family farms. The pork is then dry-cured for months with basic ingredients like sea salt and coarse pepper, using the same ancient methods passed down through the centuries. Today, families all over the world enjoy our Del Duca® Prosciutto, sopressata, salame, pancetta, mortadella and capocollo. Learn more.

Westfield Farm has been handcrafting award-winning farmstead cheeses in Hubbardston, Mass., since 1971. Located on 20 acres in Central Massachusetts, the farm turns out a little over 1500 pounds of cheese per week. We are very proud of our many national awards, including Best of Show at the American Cheese Society’s 1996 annual convention. While most of our cheeses are served in the country’s finer restaurants or sold in specialty stores, it is hoped that this web site will allow many people without easy access to those outlets to enjoy what many consider to be the finest selection of goat cheese (as well as two new cow cheeses) in the country. Whether called Chevre, Capri, goat cheese or just plain cheese, It is all made farm fresh, by hand and with pride. Learn more.

New Harvest was founded in 2000 by Rik Kleinfeldt and Paula Anderson. New Harvest was originally located in a drafty shed on the site of the old Washburn Wire factory in Rumford, Rhode Island–seen above, in the drawing by our old friend Jean-Paul Jacquet. Learn more.

Dried cranberries appeal to today’s health, nutrition and quality conscious consumer. They are and contain no preservatives or sulfites. Baked goods get a nutritional boost with dried cranberries. Great in holiday recipes, or add fruit flavor to granola and trail mix. Wonderful as an anytime snack. Learn more.

Virginia & Spanish Peanut Co. is conveniently located in Providence, Rhode Island and services the New England region with a complete line of nuts, bakery, confectionery and concession supplies. Our wide range of products can be found in restaurants, markets, bakeries, candy and ice cream shops, and are ideal for fundraising events as well. Learn more.

Baby Greens provides year-round subscriptions of sustainably grown gourmet salad greens delivered to your door once a week. It's fast food that's good for you!